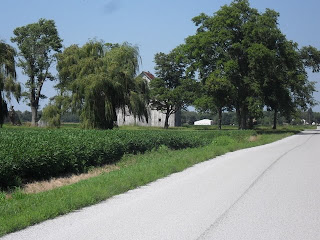 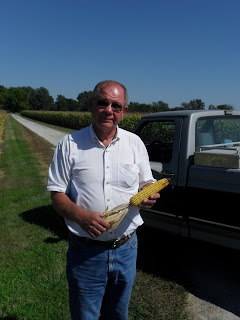 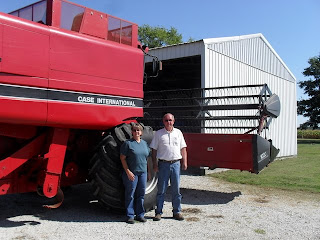 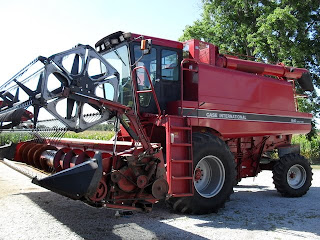 Just the Basics: Note on Saturday, 8/28: We have finished catching up on this post!

40 miles, virtually all on great, lightly-traveled roads, in sunny but temperate weather - a wonderful day all around.

We are waiting to go out to dinner with our friends Janie and Ephraim Fischbach, who will pick us up at our motel shortly, so we may not complete today's post until sometime later, but look for the following stories in For Those Who Want More:

Visiting the Miller Farm in Newton Township, Jasper County, IN: As we rode along Road 1000 W shortly before turning onto State Highway 114 Becky thought she might have gotten a bee inside her partially zipped safety vest. We paused in a farm driveway for her to check. Just as we were about to set out again a truck turned into the driveway and stopped - it was the farmer, John Miller, and he thought perhaps we'd stopped because we had a flat or something and might need some help - later in the conversation we learned that he had once driven another cyclist who did have a flat back to the last campground!

Riley had noticed what looked like some sort of drain in the ditch by the driveway and asked John about it. He got out of his truck to show it to us and explain how the fields are drained, generally - perforated plastic tubing under the ground - somewhat like the drain from our backyard out to the street back home. He seemed not to mind our questions and so one thing led to another, and we were eventually invited to come see the combine and how it works. Here are a few tidbits we remember - we wish we could recall all the details. Any errors are ours, not John's!

Encounters Along the Way: Lots of nice mini-encounters today:

(1) Morning Glories: We have been seeing morning glories climbing up cornstalks from time to time, and were charmed. John Miller told us that this is quite a problem for farmers - most use RoundUp to kill weeds, and plant corn and soybeans that are bred to be RoundUp-resistant - but morning glories are also naturally RoundUp resistant. A more toxic pesticide can be used but for ecological reasons can't be used in sufficient amounts. He understands that a new morning glory-specific weed killer is under development.

(2) Milkweed Report: The lovely, warty milkweed pots are swelling - soon we expect to see the gossamer parachutes that carry their seeds floating from the burst pods.

(3) "Butterflowers": For days we have been biking by lines of tall purple clover filled with little yellow butterflies, perched like a new kind of blossom on the clover - viewed from a car speeding by they might easily appear to be yellow flowers - we call them "butterflowers."
Posted by Riley and Becky at 3:13 PM