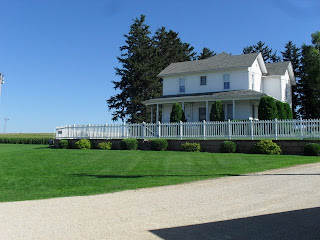 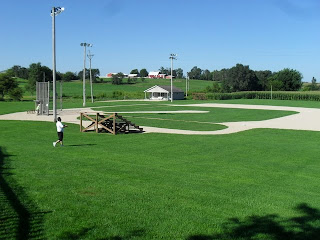 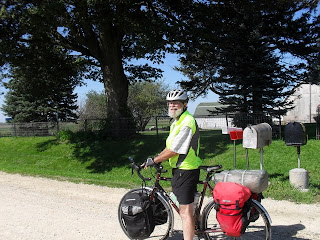 Just the Basics: 31 miles - turns out they were hillier miles than expected - part of the route had been left out when we made our previous calculation of the climbing we'd do - but the weather was so much better it was OK. Actually, we might once have thought it hot - it was still in the 80s after 3 - but the humidity was much decreased so all was well. We did quite a bit of traveling on gravel today and had to do a detour due to road construction, but we had a fine day.

On our way out of Dyersville we chose a route that would take us to the Lansing Family Farm which was the site of Field of Dreams, the wonderful 1989 baseball (and so much more) movie starring Kevin Costner and based on W.P. Kinsella's Shoeless Joe (which we are reading).

Tomorrow: About 40 miles to Lowden, IA, mostly along IA 136, where we'll stay in a place where we'll have a kitchen and can do some cooking. The weather should again be comfortable. = ) = )

Field of Dreams: The farm where Field of Dreams was shot has been owned by the Lansing family for more than 100 years, and the family has done a wonderful job of preserving the site for the thousands of folks who have visited it since the movie was made:

Evil Corn - Who Knew? We have been rolling by fields of corn ever since we started this trip. Much of it is field corn for stock feeding or corn destined for high fructose corn syrup or ethanol (Yikes!), but some has been sweet corn. Riley had dreamed that we would eat countless ears of fresh corn on the cob as we made our way east. Sadly, this has not happened - most of the places we eat don't seem to serve vegetables at all - or they are canned (!!); we've had corn twice when camping and Riley had it one other time. We kept thinking we'd get it in Iowa, anyway - but it turns out that the sweet corn season is over in Iowa - we couldn't even buy it for our camping meal tonight.

It gets worse! Furthermore, we read recently that the huge acreage of corn throughout the Midwest actively contributes to the excessive humidity we've been experiencing, because the plants give off so much water in the course of growing! Evil Corn!! It's become a game for us to point out fields of corn to each other, intoning "Evil corn!"
Posted by Riley and Becky at 3:56 PM